This entry was posted in Antidepressant on May 13, 2021 by Lyle Murphy.
Fact Checked

A person may become interested in natural trazodone alternatives after the medication becomes ineffective or causes too many unwanted side effects.

We are familiar with far better and safer alternative solutions than a lifetime spent taking antidepressant prescription drugs.


Do Your Symptoms
Require Trazodone?

Alternative to Meds has been primarily invested in antidepressant withdrawal for well over fifteen years. Our programs are based on holistic and environmental medicine. Our published evidence demonstrates that over 77% of people who stop taking antidepressant medication by using alternative methods of treatment suffer significantly less in terms of both the number and intensity of symptoms experienced, compared to when they were medicated.
15 Years Experience by Professionals Who Understand Your Journey.
Up to 87 ½% Long-Term Success Rate.
Click to Call7 Days a Week
Join Our Information ARMY AND STAY INFORMED

The Alternative to Meds Center specializes in providing the types of treatment that are designed to help a person transition to drug-free and symptom-free daily life. Trazodone is frequently prescribed off-label to treat insomnia, OCD, anxiety disorders, pain, bulimia, and even to mitigate the side effects of other medications. That is a partial list of off-label uses for trazodone. Trazodone is only FDA-approved for the treatment of depression.7

According to a 2017 study on the effects of antidepressants for treating insomnia, the results showed that while trazodone was more effective than some other antidepressants at improving sleep, it may lead to other problems such as oversedation, REM sleep behavior disorder, and others. 6

As far as other drugs that may be recommended as “alternative choices,” they have just as high a risk of being ineffective and causing adverse or unwanted side effects. Some doctors who are not aware of better alternatives may even suggest electroconvulsive therapy. There are safer trazodone alternatives that do not carry such risks.2,3,4

At Alternative to Meds Center, we aim to address each person’s unique profile and the symptoms they wish to be rid of with a customized holistic trazodone tapering and alternatives program to achieve maximum relief of symptoms, without side effects from the treatment.

Thankfully, there are many different forms of counseling and genres of psychotherapy. These include exposure therapy, cognitive behavioral therapy, life coaching, talk therapy, spiritual counseling, and many others. Many forms of psychotherapy can help individuals with depression. For example, talk therapy is a common trazodone alternative that can help depressed patients better understand their depression. Coping methods as well as learning how to resolve problems can involve meaningfully expressing feelings and emotions with their talk therapist. Many persons have found that talking out their feelings and participating in similar therapies are very helpful trazodone alternatives. The following information may help better understand some of the various types of talk therapy.

CBT:  Cognitive-behavioral therapy is described as a practical and effective therapy for treating depression, according to Embling’s 2002 study that reported significant improvements in depression scores. With guidance, a person can become more aware of negative thought patterns or behavior patterns, which can then be evaluated and re-fashioned towards more positive experiences. 8

DBT ( Dialectic Behavior Therapy ):  A form of CBT that focuses on becoming more aware of one’s emotions, and troubling emotional responses to situations or others in one’s life. Dialectic refers to a discussion, especially one that can inspect or illuminate contradictions or illogic, and discover new ways to view old problems. By discovering new strategies one can avoid repeating negative patterns of the past. A study on older adults receiving DBT found a significant difference in sustained remission compared to those on medication alone. 9

Exposure therapy:  Sometimes called ERP or exposure with response prevention, the technique is based on a theory that one can learn to disengage or “unlearn” previous patterns by desensitizing or softening the usual anxiety spikes one has associated with certain triggers. According to a 2015 research study out of the Netherlands, the majority of this work is done outside of a formal session in the form of homework assignments. Another study suggests that willingness on the part of the client is the best predictor of success using this form of treatment. 10,11

Clapp et al’s study on the “Gut microbiota’s effect on mental health: The gut-brain axis.” reports that toxin-induced inflammation causes mood disturbance to occur. We also note the findings of Stephen Genuis’ research that toxicant exposure is the largely overlooked elephant in the room when it comes to causes of mental illness and disorders in our modern-day epidemic of mental health concerns. In our clinical experience at Alternative to Meds Center, we have seen much success after toxin removal using chelation, sauna detox, nebulized glutathione, and other methods of toxin removal. 12,13

A wealth of research findings have laid out a clearly-lit pathway to improving mental health by correcting the diet so that neglected nutritional deficiencies and imbalances are not able to induce or intensify and prolong symptoms such as depression. The simple act of taking daily supplements of vital nutrients and amino acids can have a profound reduction in psychiatric symptoms. 14,15,16 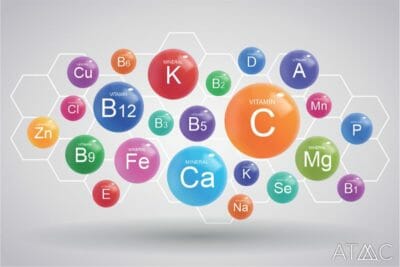 According to an exhaustive study to measure which foods provide the most nutrient-dense source of those elements which relate to the prevention and treatment of depressive disorders, the following supplements are recommended:  folate, iron, long-chain omega-3 fatty acids, (EPA & DHA), magnesium, potassium, selenium, vitamin B1, B6, B12, vitamin C, and zinc. 22

These nutrients are found most concentrated in foods such as animal organ meats, shellfish and seafood, green leafy and cruciferous vegetables, and peppers. The diet can also be boosted for these nutrients with food-based supplements. According to Sarris et al’s research paper published in the Lancet, Nutritional Psychiatry has begun to focus directly on these principles for improvements in holistic mental health treatment. 23

One of the best-known but possibly most under-used therapies for depression and anxiety is physical exercise. Clinical trials show that cognitive function also improves when the body is exercised regularly. Benefits have also been reported for improving self-esteem and social withdrawal. 17,18

Another perhaps under-appreciated therapy for depression and other unwanted symptoms comes in the form of light therapies. Michael Termin’s clinical research on treating sleep disorders with light therapy is fascinating. Richard Swartz and Jacqueline Olds write more about the therapeutic potentials of using light therapy to treat a wide range of conditions including dementia, seasonal and non-seasonal depression, sleep disorders, and ADHD in “The Psychiatry of Light.” 19,20

If you are taking this drug and wish to stop taking it and decide to use an alternative to trazodone, it is advised to consult with a doctor first as discontinuation may cause trazodone withdrawal symptoms. Additionally, doctors who prescribed this medication in the first place may be more likely to recommend other medications when patients seek alternatives. They may not know very much about non-drug-based alternatives to trazodone.

If you are seeking trazodone alternatives because of the side effects and other problems related to antidepressant drugs, consider a consultation with a holistic rehab center such as Alternative to Meds Center in Sedona. Also consider a holistic, alternative, natural, or integrative doctor. Look for healthcare providers who carry the same medical licenses as traditional doctors. Though they can prescribe antidepressant drugs, they prefer to use their medical knowledge in different ways.1

When people have been prescribed antidepressant medications, it is usually before there has been any investigation to identify what is actually causing and contributing to their depression.2

A serotonin deficiency is typically what is blamed for the cause of depression. But was it only an off-balance in serotonin and there are/were no other reasons why? What if the person has also suffered low thyroid? What if they have an accumulation of neurotoxins from the environment such as toxic heavy metals that greatly damage energy metabolism? Internal inflammation and swelling which occur from food allergies can slow down metabolism. This can also be a contributing or directly causal factor of depression. If the person has a diet that is poor in essential minerals and other nutrients, then their CNS and brain may not be able to create what’s needed for healthy functioning.

We may forget that our mind suffers from the very same assaults of a poor diet that our body suffers from. Or maybe the person is just responding to an environment that is unfulfilling, and they need a more supportive surrounding to make healthy decisions. These are only a sampling of the various factors that can contribute to a depressed state. The important thing is to investigate until the root causes can be identified and thus resolved safely.

We at Alternative to Meds Center are committed to discovering the medical reasons why a person is struggling with depression, anxiety, or an inability to sleep. Our program includes lab tests, and supporting the neurochemistry through natural substances, as well as shedding the lifetime accumulation of toxins to enable neurochemistry rehabilitation. We also offer safe medication withdrawal methods, targeted nutrition therapy, amino treatment, massage therapy, yoga, peer support, personal training, exercise, and many more holistic therapies, All of these therapies are provided as stepping stones to overcome depression. We invite your call, so you can talk to us and receive a comprehensive understanding of how a variety of natural trazodone alternatives can help to overcome lingering and troubling symptoms.