This entry was posted in ADHD Medication on May 14, 2020 by Diane Ridaeus.

Testing to find and correct underlying reasons for unwanted symptoms, i.e., narcolepsy, fatigue, mental fog, lack of focus in life, lethargy, depression, etc., provides the clearest path back to naturally robust mental health without drugs. This is especially exciting because one can now wean off Adderall without the troublesome symptoms commonly associated with coming off stimulants.

Using holistic, safe, and proven methods of weaning off Adderall, we help our clients regain freedom from drugs and relief from the symptoms that led to drug use in the first place. Where medication dependence and addiction occurred as a result of taking prescription drugs over a substantial length of time, walking back that addiction to Adderall or other stimulant drugs can be best achieved using scientific methods and treatments.

Why is Adderall Addictive?

Adderall is a combination of two stimulant drugs classed as amphetamines. These are both ranked high for the risk of addiction or dependence.

Stimulant drugs have a long history involving many kinds of uses. It is only in the last few decades that pharmaceutical companies targeted children in particular, and so excessively. According to statistics reported by researchers, prescriptions for ADHD drugs for children such as Adderall doubled from 2006 to 2016.

But children are not the only target for stimulant drugs. Overall, it is estimated that the number of people, including adults, children, and teens taking stimulant “ADHD” drugs nationwide increased to 5 million between 1990 and 1998. These numbers are truly staggering, and they keep going skyward. For example, in 2016, the CDC (Centers for Disease Control) reported the number of American children alone diagnosed with ADHD was well on the way to surpassing 8 million.4

These numbers shouldn’t be glossed over too quickly. They represent generations to come where people are continuing to take stimulant medication long after they have exited the classroom of their youth. It is the habitual taking of drugs over many months, years, even decades, that develops the dependence and the addiction. At ATMC, we know that proper help for weaning from stimulants involves not going more quickly than the body can tolerate. The right pace allows the various systems in the body to begin to normalize again. We are aiming for a stable recovery from Adderall addiction.

Notes on the History of Prescribed ADHD Drugs 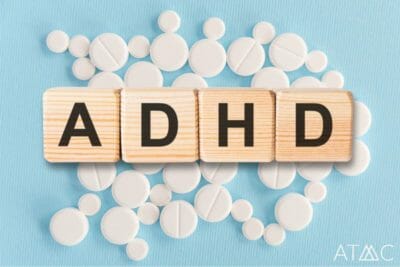 As early as 1929, and on into the war years of the 1940s, doctors prescribed Adderall to adults, mostly women, as a weight-loss drug. It was also marketed as a drug for mental alertness, and used in the military where it caused a serious addiction crisis. As a result, the FDA pulled amphetamines off the market, such as Benzedrine, Adderall, and others. Unlike today, the addictive quality of amphetamines was unshrouded. It was recognized and there was a vigorous public outcry against these amphetamine drugs as they exploded into an addiction crisis of scandalous proportions. Today, the advertising wing of the drugmakers have overcome such obstacles, at least until we can realize a better-educated consumer base that cannot be lied to. 4,6,7,8

Shockingly, the FDA again allowed the same amphetamine, Adderall, back on the market, but this time for something called ADHD, and for another condition called narcolepsy. ADHD makes up the largest of these two consumer groups, which include both children and adults. Doctors also prescribe Adderall to treat a sleep disorder called narcolepsy. After 20 sudden deaths and 12 reported strokes in Canada alone, plus many other cardio-related injuries, Adderall was again pulled from the market. But, due to some fancy lobbying and possibly other back-room shenanigans, the drug was again allowed back to the market. This is a drug that has accumulated more scandals than many others, yet it remains used heavily on children and indeed adults, today.5

Are Adderall and Other ADHD Drugs Creating a Generational Addiction Crisis?

The use of stimulant drugs on children has been in widespread use since the 80s, leaving sudden deaths, confusion, controversy, compromised health, and addiction damage in their wake.2 A person with narcolepsy experiences daytime sleepiness, sometimes sudden, and intense. For safety on the job, and other reasons, a stimulant drug serves as a sleep-preventative measure for someone with this condition. This is a positive outcome, except for one thing. The drug does not actually address the underlying cause of the sleep disorder but can only provide something of a temporary solution. Temporary at least until the underlying causes can be addressed and corrected.

Whatever measure of truth there may or may not have been in diagnosing millions upon millions of youngsters as needing to be drugged to be able to sit still in class, this had led to generations who have arrived into adulthood bringing with them a dependency on amphetamines/stimulants. Unless this trend is brought to a halt, this will continue to be a generational problem, possibly growing larger in scope in each new decade.

How Common Is Adderall Addiction? All stimulant drugs carry liability for addiction. Adderall is an amphetamine, a close cousin of the street drug referred to as methamphetamine or meth. Meth has a near-instant onset of effect, as it crosses the blood-brain barrier very easily. Adderall also easily crosses the blood-brain barrier. Both drugs create similar effects, with nearly identical molecular structure. Drug researchers report that structurally these are very nearly identical drugs and cause an unnatural flood of dopamine along nerve pathways in the brain. Stimulant drugs flood the CNS/brain with dopamine. This dopamine surge can cause a wide range of sensations and reactions. Young people taking stimulants often have a paradoxical effect of slowing down, rather than speeding up. Some children become irritable and experience even more “hyperactivity” when medicated. Others, especially youngsters, describe the sensations while on stimulants as “everything seems boring.” These children can seem subdued, or docile, less like kids and more like adults. The drug can dampen or flatten emotions, at least until the drug wears off. The drug also dampens appetite, which is why it was so popular as a weight-loss drug in earlier times. In adults, common side effects are wide-ranging as well, including a lift in tone, euphoria, increased heart rate, sharpened alertness, feelings of energy, invincibleness, confidence. (see below for a more complete list of Adderall side effects.)

However, like most things in the world, what goes up must come down. The after-effects of a stimulant are the opposite of the initial pleasure and lift. The come-down creates a strong desire to regain those pleasurable drug effects, that flood of dopamine again. Like meth, Adderall is rated with a high risk for addiction and abuse.

There is much evidence showing a significant number of college students abuse the drug initially as a way to stay awake all night studying. However, because of its risky addictive properties, the drug can quickly become more important than tomorrow’s test.

What are Adderall Side Effects?

After taking a stimulant drug for a long period of time, whether by oral ingestion, snorting, or other methods, stopping the drug can be extremely difficult, and should never be done cold turkey (all at once). One of the most concerning aspects of amphetamine withdrawal syndrome presents as deepening depression and suicidal thoughts and behavior.3

Other withdrawal symptoms can be extremely disturbing, including:

Alternative to Meds Center provides natural holistic help for withdrawal symptoms which significantly eases the discomforts and rollercoaster that can otherwise occur.

Was Adderall FDA Tested and Approved Before Marketing?

The FDA provides guidelines for testing drugs before they reach the market. These requirements are rigorous, should assess the drug over a long period of time, and should sample large numbers of test populations in clinical trials. Researchers found that makers of Adderall and many other similar ADHD drugs have NOT followed those guidelines. Shockingly, somehow the FDA approved these drugs anyway.2,4,5 When one realizes that doctors and other clinicians diagnose roughly 10% OR MORE of all American children as suffering from ADHD, this insufficient testing has created grossly unacceptable health consequences. As a result, many children whose physicians started them on ADHD drugs like Adderall now number a large adult population who continue to suffer from the after-effects of drug treatment.

Despite the dangers of Adderall and other similar drugs, doctors wrote 5 million prescriptions in 2008. By 2012, doctors had tripled the number to 16 million prescriptions in that year. From 2003 to 2015, prescriptions written for women of child-bearing age rose by 700%. One can only conclude that drug companies placed their focus on marketing and profits much more than on consumer safety and testing. Taking action to recover is possible. We can help.

Please contact us directly at Alternative to Meds Center for more details on the programs we deliver for the holistic treatment of Adderall addiction, withdrawal, and recovery.

3. “The Amphetamine Withdrawal Syndrome.” published by the Australian Government Dept of Health in 2004 [cited 2020 May 14]