This entry was posted in ADHD Medication on March 1, 2022 by Diane Ridaeus.

How Did Ritalin Addiction Become Widespread?

Ritalin addiction and addiction treatment have become serious issues for many. Ritalin© hit the market in the 1940s and 1950s when drugmakers first marketed it as a “pep pill” and later for weight loss for adults. However, it wasn’t until the late 1980s that the committee of the American Psychiatric Association voted ADD and later ADHD into existence as an “official diagnosis.”29  In the 60s, what is now called ADHD was referred to as “behavioral problems” or “hyperkinetic impulse disorder” until the new terms ADD, and the later ADHD were promoted so heavily, that they eventually became household words. Stimulants had been used on children with behavioral problems since the turn of the LAST century and with Ritalin and similar drugs, the practice continues today. The ADHD label targets children in the main, but now also includes adults with ADHD.

Ritalin is also approved for the treatment of narcolepsy, a condition that is not completely understood and results in excessive, irresistible daytime sleepiness and nighttime sleep disturbances. Narcolepsy is hypothesized to be an autoimmune disorder and while research is ongoing, has been significantly linked with certain vaccine adjuvants, exposure to heavy metals, chemical exposures from woodwork, vitamin D deficiency, and exposure to fertilizers and pesticides.22-27

With a breathtaking rise in the number of prescriptions for Ritalin and other stimulant drugs for children and adults in America and around the world, medical researchers such as LeFevre and Arcona have been sounding an alarm for decades.14

Shockingly, in 2016, the CDC reported that about 10% of children in the US were diagnosed and labeled ADHD.2,3

Astonishingly, the results of the experiments on children were reported as “spectacular.” In truth, most of the children became emotionally subdued and disinterested in their environments. Eureka! The practice was touted as a one-shot treatment for rowdy kids. And, you don’t have to hire any therapists, dieticians, tutors, educators, or improve curricula or teaching methods. History shows that expensive and expansive marketing coupled with aggressive lobbying helped take the toxic drug Ritalin to the top of the charts in sales. This occurred all over the world.

Increasingly, many off-label uses for Ritalin have been reported in the Journal of Human Psychopharmacology Clinical and Experimental, including to treat depression in the elderly, cancer patients, obesity and weight loss, chronic fatigue, psychosis associated with depression, and post-stroke patients, as examples.6

Ritalin has sought to fill the very large gap that research has not yet filled concerning the actual causes for such a wide array of disorders and symptoms. This may, at least in part, explain how Ritalin and similar drugs become so pervasively, and some would say intentionally, popularized.1-4,14

Side Effects of Ritalin

According to drug regulators as well as researchers, the side effects of Ritalin include sudden death, heart attack, stroke, suicide, and many others. And yes, these happen even to children as well as to adults.4,5,19,20

The regulators admit that methylphenidate’s mechanism of action is unknown. However, the FDA suggests it may have something to do with dopamine and norepinephrine manipulation in the CNS, as this would explain, at least in part, the drug’s stimulant effects.21

Ritalin (methylphenidate hydrochloride) is a stimulant drug that produces similar side effects as cocaine, meth, and other amphetamines, and drugs similar to amphetamines. There are now time-release versions of Ritalin that have been brought to market, such as Metadate© in 10mg – 80 mg capsules.27

Side effects can intensify over time. Some come on with no warning. Often, the side effects exhibited will lead to a physician prescribing a second drug, or multiple other drugs to suppress the additional side effects, putting the person on a very slippery slope toward the mental and physical chaos that often follows over-prescription. One of the most problematic Ritalin side effects is its potential for addiction and abuse. Though studies on human subjects were not found, experiments published in the Journal of Pharmacology and Experimental Therapeutics on squirrel monkeys demonstrated that the effects of self-administered methylphenidate were no different than self-administered cocaine and other stimulants used in the experiment.15

Rarely Mentioned Side Effects of Ritalin

At Alternative to Meds Center, we know that labels and mood-altering drugs are poor substitutes for analyzing the root cause(s) of a condition or set of symptoms that an individual may be experiencing. Programs at ATMC are designed to assist a person in several different ways. You can view a summary of the many treatment options that are delivered at Alternative to Meds. Each person will be individually programmed according to their unique needs and profile. More information follows below.

Information about withdrawal phenomena is sparse for Ritalin and Concerta, both methylphenidate-based products.5,19 There are two versions of Ritalin: immediate-release and sustained release. Concerta is extended-release only. An oral version of methylphenidate called Quillivant© was marketed in 1955 as a sustained release daily medication. A chewable Ritalin equivalent tablet called Methylin© is also available through prescription, though is not approved for those under 6 years old.21 Though limited, information on withdrawal phenomena gleaned from these and other references as indicated, is provided below:

What Methods Are Used in Ritalin Withdrawal Treatment?

At Alternative to Meds, lab testing and other assessments help gather enough information to analyze and determine the possible underlying causes of unwanted symptoms. For instance, Ritalin is often prescribed to treat adult narcolepsy. Narcolepsy patients are not sleeping well and will feel excessively tired during the day. Simply taking chemical stimulants will awaken a person, but will not handle the underlying issues. We proactively address root causes at ATMC. We do this using natural, effective, and non-invasive methods. These are based on the assessments and testing on arrival to the program.

For ADHD symptoms, ATMC applies the same principles. Assessments, testing, and analysis provide a clear path to isolating and eliminating unwanted symptoms. There is no guesswork involved.

Thus, these problems can be reduced and eliminated without resorting to simply masking these problems with drugs. Environmental medicine applications, holistic neurotoxin removal and neurotransmitter repair are among the various services are available. Correction of diet is also of prime importance in recovery, based on the principles of orthomolecular medicine. As a result, gentle and gradual withdrawal can be made much easier and much more tolerable.

How Are Ritalin Alternatives Used? 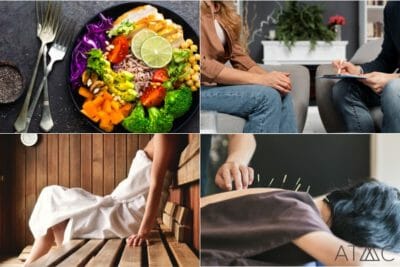 Alternative to Meds Center medical and program staff design a client-specific program to assist with the gradual reduction of medication. Ritalin and all CNS stimulant drugs are prone to addiction and dependence, and their withdrawal may induce crippling symptoms. Rather than attempt to suppress withdrawal or other symptoms, alternative therapies are used extensively, in conjunction with constant and careful medical oversight. These steps in the program enable smooth and comfortable withdrawal.

Before and during treatment, the program utilizes lab testing to inform the most effective holistic therapies that will be used, including supplements to support natural neurotransmitter rehabilitation, therapeutic sauna, soothing relaxation therapies, colon hydrotherapy, and other methods of neurotoxin cleanout, exercise, corrected diet, and many other treatments. The diet, exactly tailored, can facilitate and speed up necessary neurotransmitter repair and provide energy naturally and robustly. Many supportive actions such as counseling, life coaching, equine therapy, art therapy, acupuncture and other stress-reduction techniques, yoga, NAD+ and other IV therapy, Qi Gong, nebulized glutathione, and many other options. A rich combination of these holistic therapies can greatly ease the difficulties of reducing and eliminating stimulant drugs without harsh and cumbersome withdrawals. Additionally, comprehensive educational components empower each client in better methods of self-care. These offer valuable tools that will enrich one’s health and lifestyle now and in the future.

There is much more to learn about coming off Ritalin safely. Importantly, the programs at ATMC improve one’s health in the process. And, please ask us about your insurance coverage. We look forward to your call about Alternative to Meds Ritalin addiction and withdrawal treatment programs.

1. Bradley, C “Behavior of Children Receiving Benzedrine” AM Journal of Psychiatry [Google Scholar online] 1937 issue, and from psychiatryonline.org [cited 2020 May 13]

14. LeFevre G, Arcona A,  “ADHD among American Schoolchildren – Evidence of Overdiagnosis and Overuse of Medication” The Scientific Review of Mental Health Practice Summer 2003 Vol 2 No 1 [cited 2022 May 17]

Originally Published May 13, 2020 by Diane Ridaeus