This entry was posted in Antipsychotic and tagged Holistic on October 30, 2018 by Diane Ridaeus.
At Alternative to Meds Center, we provide natural Geodon alternatives that can help you reclaim your life. There is a better alternative than living life medicated on antipsychotic drugs like Geodon.

For individuals who have been prescribed this medication, we can provide effective, structured, holistic treatment therapies. Doesn’t that sound better than dealing with debilitating side effects the rest of your life?


Are you really your Diagnosis?

Alternative to Meds has been providing natural Geodon alternatives for over 15 years. We have published evidence regarding our success. Despite being largely ignored, there are generally other ways to treat mental symptoms that are far less toxic than prescription drugs. Our staff is largely composed of professionals who were at one time MIS-diagnosed. Often there are medical conditions or other situational factors, and a lifetime of drugging may not be necessary.
15 Years Experience by Professionals Who Understand Your Journey.
Up to 87 ½% Long-Term Success Rate.
Click to Call7 Days a Week
Join Our Information ARMY AND STAY INFORMED
Finding alternatives to Geodon can be truly confusing. You clearly remember what the last hospital visit looked like and that is enough to scare you into not being adventurous. But you are still looking for someone who might know of a better way. We have lived this ourselves, and impart both a professional and personal perspective. Many of our staff were once diagnosed and found that we could balance our lives in other ways besides drugs.

This medication is classified as an antipsychotic, more specifically an “atypical,” second-generation antipsychotic. Antipsychotic medications are often prescribed when someone has gone through a psychotic break, after antidepressants or other drugs have been ineffective, or when other drugs have yielded unbearable side effects. However, individuals prescribed this medication for mental symptoms often encounter more problems than this drug was first prescribed to control. For those who have tried other drugs with no success and have been given Geodon as an alternative, they are very likely to experience the same side effects, paradoxical effects, adverse effects, or inadequate effectiveness that occurred with other medication treatments.

Why Is Geodon Prescribed In the First Place?

Geodon is prescribed for the treatment of bipolar disorder symptoms and symptoms of schizophrenia. However, when this medication cannot adequately manage these symptoms, or when it induces uncomforting side effects, a Geodon alternative schizophrenia treatment should be considered. Traditional Geodon alternatives in the form of drug treatments include switching medications, such as mood stabilizers, other atypical, second-generation, and typical, first-generation antipsychotics.

Non-drug-based therapy is a commonly recommended Geodon holistic alternative to psychiatric medication. While therapy can play a very positive, effective, and important role in antipsychotic alternatives, therapy is ever more successful when used in conjunction with other Geodon holistic modalities such as searching for underlying causes of symptoms and focusing on how to abate symptoms through relieving the causes.

Symptoms are signals that the body is in distress. An antipsychotic drug does not address or resolve an individual’s underlying reasons for their mental symptoms, but only masks it temporarily. Using other medications such as mood stabilizers as alternatives to Geodon may seem effective in the beginning, but these drugs are generally not tolerable for prolonged use. Long-term use of these drugs can cause severe withdrawal or even addiction. Other medications that may be recommended when Geodon is not working are very likely to cause similar if not the same issues. Geodon complementary alternatives should be carefully selected and uniquely customized for each person’s different needs. You do not have to take medications to manage your problems. Surprisingly, holistic Geodon alternatives may be much more effective.

Individuals taking these drugs often have trouble setting goals, living their life as they desire to, and may be unable to perceive reward. The answer for why this is happening is different for each person. However, there is often an excessive amount of dopamine. Too much dopamine makes everything feel stimulating and can cause mania, as dopamine is a neurochemical that controls the perception of reward. This can be a result of the neurology being stimulated by toxins, i.e., after toxin exposure, or genetic issues. For example, a diet lacking in essential nutrients such as vitamin C, vitamin B6, niacin, zinc, or preservatives, low blood sugar, or other food issues may cause psychosis for sensitive individuals. Then, beginning an antipsychotic like Geodon is targeted to block dopamine, causes the individual to be left without the enjoyment of reward. 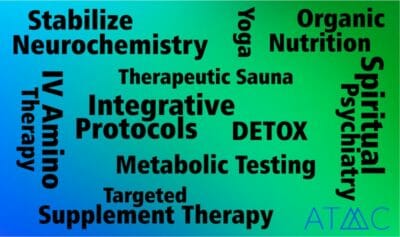 We help individuals decrease their dependency upon antipsychotic medications, other drugs, and dependency on alcohol with our medical professionals. We do this by using carefully selected tapering methods. We also employ natural substances that stabilize neurochemistry. Importantly, the removal of accumulations of neurotoxins could relieve the mental symptoms for which Geodon was originally prescribed to treat. We perform lab tests to find what caused the original problems and we usually find toxicity to be the cause. Therefore, we restrict sugary foods, processed foods, and caffeine. We also fully utilize specific supplements known to be effective in these persons.

Our program focuses on body detoxification from neurotoxins environmentally accumulated, therapy with amino acids, nutritional therapies, support from peers, personal training, exercise, yoga, massage, and other therapies to provide successful Geodon alternative medicine. We invite you to call and receive a more complete understanding of all the types of Geodon alternatives help that are available. Diane is an avid supporter and researcher of natural mental health strategies. Diane received her medical writing and science communication certification through Stanford University and has published over 3 million words (the equivalent of about 60 Agatha Christie novels!) on the topics of holistic health, addiction, recovery, and alternative medicine. She has proudly worked with the Alternative to Meds Center since its inception and is grateful for the opportunity to help the founding members develop this world-class center that has helped so many thousands regain natural mental health.