This entry was posted in Antidepressant on February 13, 2021 by Diane Ridaeus.

Medical professionals often do not consider the ramifications of, or understand potential complications of trazodone withdrawal.

While trazodone is considered much safer than narcotic sedatives, still there are potential trazodone side effects and withdrawal complications3 that tend to get disregarded by prescribers.


Do Your Symptoms
Require Trazodone?

Alternative to Meds has been instrumental for the last 15 years in forging superior antidepressant withdrawal help. We have published evidence regarding our success. Many of our professionals and staff also struggled with medication issues, which basically forced them down the road of natural and holistic mental health. We have taken these hard lessons and forged them into purpose so that we can help others in similar ways
15 Years Experience by Professionals Who Understand Your Journey.
Up to 87 ½% Long-Term Success Rate.
Click to Call7 Days a Week
Join Our Information ARMY AND STAY INFORMED

Trazodone Withdrawal is a Specialty at Alternative to Meds Center

Trazodone is a generic antidepressant (serotonin antagonist reuptake inhibitor, SARI) that is prescribed for depression and for numerous other off-label uses. SARI drugs are thought to block serotonin from adhering to 5-HT2 receptors. After neurochemical expression, serotonin would be broken down and removed. As with all antidepressant agents that are serotonergic, a deficit in vital levels of serotonin will often occur, leading to worsening depression. SARI drugs such as trazodone are also thought to alter how dopamine, norepinephrine, and other neurochemicals are distributed in the brain and along the CNS.

Before starting or stopping a drug such as trazodone it is recommended to adequately research and understand as much as possible in order to make an informed decision. Below is a body of information that may help to provide the most searched for answers about trazodone side effects, trazodone withdrawal symptoms, and other relevant data.

At ATMC I was always supported. The staff was great at providing opportunities for me to work towards stability. What helped me here was always keeping a positive outlook and the constant encouragement and reminders to keep faith in myself.

What Is Trazodone Used For?

Trazodone is a generic drug prescribed for a number of conditions. Brand names are Desyrel and Oleptro (now discontinued). A time-release version is also manufactured called Desyrel Dividose.  First approved by the FDA in the treatment of major depressive disorder (MDD), it is more often prescribed in the treatment of insomnia. Other uses include anxiety, Fibromyalgia, headache, and is also used as a sedative for cocaine or alcohol withdrawal. Additionally, trazodone is prescribed off-label for pain syndromes, panic disorder, diabetic neuropathy, eating disorders, and OCD (obsessive-compulsive disorder).

Note: There may be effective non-drug-based trazodone alternatives to be considered that your physician has not told you about. Please ask us about these.

Trazodone side effects include:

Some of these side effects may require immediate medical attention as in severe allergic rash, seizures, cardiovascular events, or any severe reaction.

Some persons may experience very little in the way of trazodone withdrawal symptoms during gradual cessation. Others may have more noticeable reactions.1

WARNING: Abruptly stopping an antidepressant drug can often induce intense withdrawals that can last for a very long time, and may significantly increase the time required for complete recovery.

Commonly reported adverse trazodone withdrawal symptoms and effects can range from mild to moderate to severe.

Trazodone has a half-life of approximately 6 to 9 hours and trazodone withdrawal symptoms may begin quite soon, within a day or a day and a half of the last dose. These figures would be different if a time-release version of the drug was prescribed.

Certain factors may influence how intense withdrawal can be for an individual, such as how long the drug was taken, the general health of the individual, and how high the dosage was. Taking trazodone for long periods of time may result in trazodone addiction or dependence and requires medical oversight for a safe and more comfortable experience.

Always consult your prescribing physician or other competent medical practitioners before stopping trazodone or any antidepressant drug.

The following section addresses some of the most commonly asked questions and searches for information about trazodone.

Is Trazodone a Sleeping Pill?

Trazodone is classed as a SARI type of antidepressant. The letters stand for Serotonin Antagonist Reuptake Inhibitor. SARI drugs also block adrenergic receptors. Trazodone could also be classed as a hypnotic/anxiolytic (similar to a benzodiazepine) and is sometimes prescribed off-label for insomnia or other sleep issues, such as nightmares. Trazodone was not specifically designed (or licensed) as a sleeping pill but it has become one of the most frequently (off-label) prescribed drugs for insomnia, because of the drug’s “knock-out” effect. Alternatives to trazodone are becoming more widely available for sleep disturbances, which could be considered where prescription drugs are not the best of all options.2, 4, 5

Is Trazodone a Narcotic?

Technically, a narcotic is any drug that affects mood, induces sleep, or numbs pain or other unwanted sensations. The word narcotic comes from the Greek “narko,” which means to numb pain. In a legal sense, the word narcotic most often refers to an illegal psychoactive substance. In medical usage, the word has come to generally refer to opioids such as heroin or morphine. While there are similarities in effect between trazodone and narcotics, legally there is a distinct difference because trazodone is an uncontrolled substance in the US, and is not illegal to possess when it is a prescribed medication.

How Does Trazodone Work in the Body/Brain?

The mechanism of action of trazodone is thought to involve preventing serotonin and likely other neurotransmitters from binding to the receptors that these would normally bind to, connect with, or be attracted to. No drug can create neurotransmitters such as serotonin, or norepinephrine, or dopamine. Drugs can only interfere with how they travel or are prevented from traveling along the neuron pathways of the brain and central nervous system.

As an example, when serotonin becomes trapped in the synaptic regions, this is linked to a euphoric lift in mood. Any such trazodone side effects are artificial, and temporary until the serotonin breaks down, metabolizes, (becomes inert), and is cleared.

Does Trazodone Show up on Drug Tests?

Yes, trazodone can show up on drug tests, however, it is unlikely to be screened for in the multipanel drug tests that are commonly used, for example, in the workplace.

Is Trazodone a Benzo (Benzodiazepine)?

Can Trazodone Cause Serotonin Syndrome?

Yes, any agent which causes too much of a build-up of active serotonin in the central nervous system can induce “serotonin syndrome.” 3 This reaction is considered potentially life-threatening and medical intervention is required, without delay. Usually one of the first treatments is to withdraw the drug. This is the one exception where stopping trazodone abruptly, is recommended as to do so can be life-saving in this case. Some symptoms of serotonin syndrome to watch for include:

Treatment for Trazodone Addiction and Abuse?

The treatment for long term trazodone addiction or dependence may be beneficial where the withdrawal symptoms are intense and difficult to endure. Although the drug is promoted as not habit-forming, the actuality is that once the body becomes accustomed to the presence of the drug over time, there is the potential for a reaction when the drug is withdrawn. Whether this is called dependence or addiction, trazodone withdrawal help must be gradual.

There are many trazodone withdrawal treatment protocols that can lessen the severity of symptoms and accelerate the normalization process after trazodone addiction or dependence may have developed.

Alternative to Meds Center has refined the trazodone withdrawal treatment process using slow and safe tapering methods in the inpatient program. Each client is helped by preparing an individualized program consisting of many steps. For instance, purging accumulated neurotoxic load, corrective nutritional therapy, therapeutic massage, Reiki, and many other adjunctive therapies.

An important overall step in recovery from antidepressants is rebalancing neurochemistry naturally, to alleviate or eliminate the original symptoms that led to prescribing antidepressant medication in the first place. Exacting series of steps are completed during our programs to provide the best in trazodone withdrawal help.

The process of stopping trazodone can be surprisingly mild and easy to tolerate using such safe and gradual tapering protocols. Please feel free to ask us for more information on the processes that are used in the Alternative to Meds Center trazodone withdrawal program.

5. Mendelson W, “A review of the evidence for the safety of trazodone in insomnia.” Journal of Clinical Psychiatry [Internet] 2005 Apr [cited 2020 Aug 14] 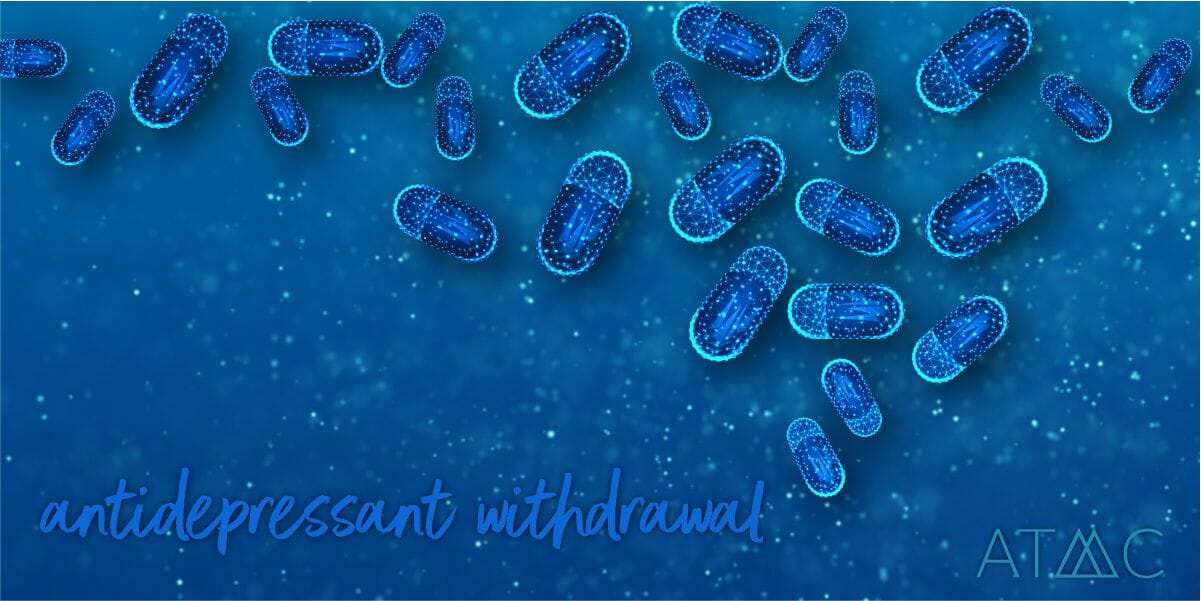