This entry was posted in Antidepressant and tagged Long-Term Effects on November 21, 2022 by Diane Ridaeus.

Prozac has often been called the miracle SSRI that revolutionized the treatment of depression. Sales were astounding! The graph of antidepressant sales resembles the trajectory of a 747 taking off to heights never before seen. However, the graph of rising mental health disabilities looks identical.

However, in 2005, the FDA required a black box warning on all SSRIs for increased suicidality. And, in 2005, the 747-style trajectory of both graphs begins a sudden dramatic descent showing that fewer prescriptions were written, and fewer deaths by suicide also occurred.1-3 Clearly, drug therapy is not the answer that we were led to believe, or that we were hoping for.

Are you Looking For a Better Way?
At Alternative to Meds Center we frequently speak with persons who have reached a stalemate after lengthy drug-based treatment, and who may be looking for better ways to improve mental health. For nearly 20 years the center has helped clients looking for a more natural approach to eliminate symptoms. We specialize in finding the root cause(s) for troubling symptoms and addressing the biophysical and emotional factors that may have been overlooked in previous diagnoses and failed treatments. Our success has been tracked and verified by independent researchers and says it all.
15 Years Experience by Professionals Who Understand Your Journey.
Up to 87 ½% Long-Term Success Rate.
Click to Call7 Days a Week
Join Our Information ARMY AND STAY INFORMED Prozac (generic fluoxetine} is an SSRI drug. It comes in immediate and enteric-coated (extended-release) versions. It is FDA-approved to treat MDD (major depressive disorder), bulimia (eating disorder), panic disorder, and OCD (obsessive-compulsive disorder).4  A product called “Sarafem©” was brought to market for menstrual-related issues.25  It is the same drug, fluoxetine, targeting women specifically. But Sarafem carries the same black box warnings and other potential risks as any other fluoxetine product. The theory behind treatment with SSRI drugs is that these drugs immobilize the serotonin transporter system, allowing for an accumulation or concentration of serotonin at the nerve synapses. That the SSRI had an activating effect on depression symptoms was reason to believe that a deficiency of these chemicals was present. This now virtually debunked “chemical imbalance theory” has supplanted most other therapies for many decades. Earlier drugs attempted to do much the same with other chemicals — creating something of a chemical domino effect — to alter the distribution of certain natural hormones like serotonin and others, to attain improvements in mental health.5 The purpose sounds good, in theory at least, which is to chemically change behavior and mood.

There are problems with this theory that have come to light, especially after the long-term effects of Prozac have been more thoroughly studied. According to Moncrieff et al in a published decades-long body of SSRI and antidepressant research, the authors suggest that while antidepressants do have mind-altering effects, and have an emotion-numbing characteristic, they should not be regarded as clinically therapeutic above the level of a placebo.6,7

SSRIs are typically prescribed long-term for months and years. The most commonly reported adverse effects of Prozac therapy come from short-term studies. Prozac has an activating effect that typically manifests within the first few weeks. These initial newly emerging effects can be immediate. Some examples include suicidal thoughts and behavior, rashes, panic attacks, anxiety, agitation, insomnia, mood fluctuations, and some paradoxical reactions, which are sometimes misdiagnosed as Bipolar.8 However, the long-term effects of Prozac linger well beyond the first few days or weeks of treatment. A list below shows examples, followed by a more expanded description. Long-term effects of Prozac can include:

Lengthened half-life elimination:  Drug-induced liver damage can occur as soon as 2 to 12 weeks of treatment, or over a longer period. Liver toxicity lengthens the elimination window. Prozac already has the longest half-life of all SSRIs currently on the market. Hepatitis and acute liver failure are possible outcomes without intervention. While positively identified, the mechanism by which Prozac causes liver damage is unknown.9

Sexual dysfunction:  Sexual dysfunction is the most prevalent reason people decide to stop SSRI therapy. Inability to reach orgasm, loss of interest in sex, and erectile dysfunction are all common manifestations. These symptoms typically normalize after the drug is stopped. In cases of priapism (painful sustained erection) taking short “drug holidays” has become the usual “treatment,” although sometimes surgery is necessary to avoid permanent damage, especially in children.11,15,17,18

Changes to weight:  Weight gain or weight loss is commonly reported with long-term antidepressant use. Prozac is more commonly associated with weight loss. Increases and decreases in body temperature and energy expenditure while at rest, as well as changes to appetite, are the suggested causes of weight fluctuations, according to clinical research.12,13

Impaired quality of life:  Whether from developing low-sodium, organ damage, cognitive decline, brain fog, apathy, mood dysregulation, loss of emotional responsiveness, altered gene expressions, or other lingering effects, the quality of one’s life can decline as a result of long-term antidepressant use.16

Tolerance:  After any drug is used for a long time, the body/brain/CNS will develop tolerance. Tolerance happens after neuroadaptive changes, that cause the drug to become ineffective. Even after a decade of taking Prozac, the drug may suddenly stop working as it once did and the original symptoms are not able to be masked anymore. This is often called “relapse” and is typically a point where a prescriber will increase the dose or add additional medications to continue suppressing problematic symptoms. This practice, though common, ultimately leads to worsening health conditions.21,22 Due to its relatively long half-life, Prozac is typically prescribed daily. An enteric-coated extended-release version for maintenance treatment is prescribed once every 7 days.4,18

Prozac is the only SSRI not banned for children, despite the black box warning for increased suicidality.

Prozac is FDA-approved for cases of depression, bulimia, obsessive-compulsive disorder, and panic attacks.

Off-label prescribing practices are common, though adverse effects like dizziness, fatigue, insomnia, and nausea often make such practices untenable, especially in long-term use. Some examples include reawakening sexual appetite in the elderly, premature ejaculation, weight loss, and premenstrual symptoms.19,20

FAQs About Long-Term Prozac Use

What happens when you stop taking Prozac after long-term use?

You should not abruptly stop taking Prozac. Cessation should be well-supervised and done in a slow and gradual manner to avoid harsh discontinuation symptoms. More information on safely stopping Prozac can be found on the Alternative to Meds website.

Is liver or other damage reversible after long-term Prozac use?

In many cases, toxicity can be reversed by discontinuing the drug. The longer one is taking a drug that is injuring the body, the more likely it will be that the effects cannot be reversed.21

What is the placebo effect?

From about 1750, the placebo found a place in medicine as a way to respond to patients demanding treatment when no specific therapy was available or known. A placebo is the gold standard in clinical trials to measure drug effects. Sometimes placebo is called a sugar or bread pill. The fascinating thing is that centuries of observations and decades of clinical studies have found an impressive 35-40% of patients with depression treated with a placebo alone recover.24

What drugs should be avoided while taking Prozac?

There are many drugs to avoid concurrent with an SSRI. Sometimes one drug will lessen or amplify the effect of another. Serotonergic drugs should not be combined because there is a risk of too much serotonin becoming active which can be life-threatening. Abruptly switching drugs can have unexpected results — it may take time for one drug to “wash out” before colliding with a new one. Always let your prescriber know exactly what drugs you are taking so these risks can be avoided.4

Are there holistic drug-free therapies for depression and other symptoms?

A multitude of drug-free strategies available for treating depression and other unwanted symptoms can be utilized that have proven efficacy, including CBT personal or group counseling, correction of the diet, testing for food allergies and toxic exposures, exercise, yoga, Qi Gong, neurotoxin removal, and numerous other drug-free ways.2

Holistic Treatment at Alternative to Meds 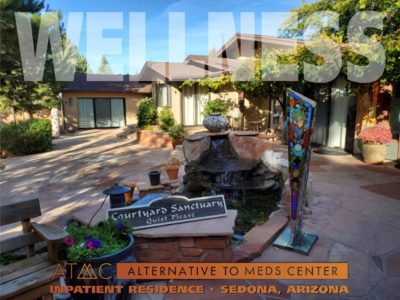 Alternative to Meds Center has been in operation for nearly 20 years, helping people to successfully come off medication and improve their mental health after long-term medication use. While an antidepressant may have been the correct choice during a mental health crisis, medication as a long-term solution is full of unnecessary risks.

What is often overlooked in a crisis situation is taking the time to isolate what factors may have precipitated the condition or symptom, and addressing them. This is the approach that Alternative to Meds Center uses to sort out and resolve symptoms that could arise from various precursors. These can include nutritional deficiencies, exposure to toxins, stress, sleep deficiency, genetic factors, and many others.

In addition to discovering and resolving the precursors, the after-effects of long-term medication also need to be resolved. And, safe and gradual cessation is another foundational step in our treatment programs. A wide palette of therapies is used to achieve these important goals in treatment which can be viewed on our services overview pages. Please take some time to look these over. There is a lot to know about holistic protocols and why we have chosen the ones that we use, and we are happy to assist you in researching these. Call us if you have more questions about how our comprehensive recovery programs work. We treat the long-term effects of Prozac on every level possible, to help clients regain a positive outlook, resolve unwanted symptoms, and improve mental health naturally.