This entry was posted in Recreational Drug and tagged Drug Addiction, Vaping on June 2, 2021 by Diane Ridaeus. The harmful effects of vaping are still relatively unknown to most. Vaping is a current fad that has infiltrated the youth of the United States. According to the FDA, “Among middle and high school students, 3.62 million were current users of e-cigarettes in 2018.” Not only do teenagers get away with vaping, due to the fruity flavors and lack of scent, but most parents also don’t understand the harmful effects of vaping. Not only does vaping come with some serious risks, but also can be the gateway drug leading to long-term nicotine or THC dependence. Despite all of the health warnings, and dangers of vaping, the phenomenon has taken the world by storm. Vaping is increasing at such alarming levels that it is now beginning to overtake traditional tobacco as the top nicotine delivery method for youth.

Let’s use the state of Minnesota as a sample to show how vape use has increased over recent years.


15 Years Experience by Professionals Who Understand Your Journey.
Up to 87 ½% Long-Term Success Rate.
Click to Call7 Days a Week
Join Our Information ARMY AND STAY INFORMED

Vape Ranks Well as a Tobacco Replacement but at What Cost?

News and media outlets are overflowing with studies and stories of vaping being used as a tobacco replacement. And yes, people are able to succeed with that, but at what risk?

Sure there are healthier versions of vapes or e-cigarettes. But for the majority of people, the vaping will subject the individual to toxic aerosols, heavy metal toxins, and other chemicals. And with the vape delivery mechanism, these chemicals are being delivered straight to the bloodstream thru the blood-brain barrier. At Alternative to Meds Center, we assist people in finding ways to become nicotine-free. The best way to avoid addiction to nicotine, vaping, or other substances, is to just say NO.

Alternative to Meds Center is an inpatient facility offering treatment for neurotoxicity, heavy metals toxicity, as well as addictive behaviors and mental health. Over recent years, there has been and remains a noticeable increase in patients who have a history of vaping or have experienced symptoms while vaping. Most vape liquids, whether containing nicotine or not, will not only have negative effects on the lungs but contain some harmful irritants that some vape users may react to. Heavy metals present in many vape liquids are known to cause mental health symptoms in individuals suffering from a toxic burden.

According to Johns Hopkins Medicine, “These products contain many different chemicals including nicotine. Nicotine is addictive and causes harmful effects to the adolescent brain, which is still developing. Aerosols produced by e-cigarettes and vaping devices are also harmful to the lungs and contain toxic cancer-causing chemicals and other harmful agents such as volatile substances, ultra-fine particles, and heavy metals like nickel, tin, and lead. Not only are teens inhaling these substances into their own lungs but bystanders also are inhaling these toxins. Other dangers include e-cigarettes and electronic devices that are defective can cause fires and serious unintended injuries. Research also suggests that youth who use e-cigarettes are more likely to smoke traditional cigarettes in the future.” 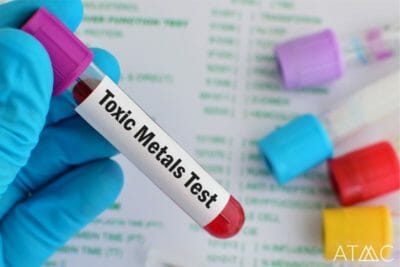 It is a well-known fact that heavy metal toxicity, such as mercury toxicity, can lead to disturbing mental health issues. Mercury hinders the ability for serotonin to be converted into melatonin, which may result in sleep problems. Mercury toxicity also may impair the norepinephrine conversion to epinephrine, resulting in a build-up of norepinephrine. Elevated norepinephrine results in anxiety, as norepinephrine acts as a chemical marker for feelings of anxiety. Mercury also creates problems with the body’s ability to naturally remove toxins.

At the ATMC inpatient center, we see hundreds of cases per year who play mental health symptoms while experiencing heavy metals toxicity. Many persons are not really aware of the risks of vaping until they see their test results. Our licensed team thoroughly reviews test results and provides treatments that will aid in the neurotoxin removal process.

Vaping Can Lead to Addiction or Substance Abuse in Teens

Teens deciding to do something not allowed, especially something that could be harmful to their health, is very concerning. While parents cannot prevent their children from experiencing things in the world, explaining the dangers of vaping could go a long way in helping your teen say “No” if they are offered a vape by their friends. Vaping comes in both nicotine and non-nicotine versions, but another popular drug used in Vape devices is THC. The Wikipedia definition for THC is as follows “Tetrahydrocannabinol (THC) is one of at least 113 cannabinoids identified in cannabis. THC is the principal psychoactive constituent of cannabis. With chemical name (−)-trans-Δ⁹-tetrahydrocannabinol, the term THC also refers to cannabinoid isomers.”

It is very important for parents and adults to be vigilant and aware of the risks of vaping. Concerning the use of vape devices, oftentimes, the vape can be filled with THC liquid and used as a means to get high. This trend is especially popular among very young vape users and teens. As seen in a Reuters article, “Overall, almost 9 percent of students had vaped marijuana, including 4.5 percent of students in middle school and 12.4 percent of students in high school.”

Marijuana has always been deemed a gateway drug. Yet now it seems vaping or e-cigarettes could be the trigger leading to additional substance abuse and unhealthy behaviors.

If you or a loved one suffers from vape addiction or suspect a case of heavy metals toxicity, please contact us right away.