This entry was posted in Health and Wellness and tagged Mercury Poisoning, Toxic Products, Toxicity on November 29, 2022 by Lyle Murphy. Seafood is a beneficial component of a balanced, healthy diet. Experts recommend consuming seafood, as it is a good source of high-quality proteins, micronutrients, omega-3 fatty acids, and other healthy fats. Seafood includes freshwater and saltwater fish like salmon, sea bass, flounder, catfish, and more as well as shellfish like shrimp, crab and lobster. A variety of both can improve heart development and heart health.1

The nutritional benefits of seafood, coupled with intense marking from seafood companies and lobbyists, suggest that you should eat large quantities of fish for good health.

However, it’s important to consume all things in moderation, including seafood. Like any other food, seafood should be consumed wisely to achieve health benefits without causing health risks.

One of the most significant risks when it comes to seafood is that of mercury exposure and mercury poisoning. Some types of fish contain significantly high mercury levels, but much seafood contains at least some amount of methylmercury, or organic mercury. Methylmercury is a neurotoxin that can negatively affect the health of your brain and has also been linked to cardiovascular disease, according to a 2014 study.2

Can You Get Mercury Poisoning From Seafood?

Small amounts of high-mercury seafood, large amounts of low-to-moderate-mercury seafood, or a combination of both can contribute to the heavy metal levels in your body. In fact, the primary source of methylmercury exposure in humans is through eating fish and shellfish, and most mercury poisoning can be linked back to seafood consumption.

As mentioned, mercury poisoning from fish can be linked to either:

It’s important to understand the health benefits and hazards of seafood, so you can properly keep your system free of toxins while maintaining a healthy diet. It’s also important to understand how these toxins can affect your body. Unfortunately, some seafood-selling corporations have tried to muddy the waters with misinformation, despite the negative effect it could have on millions of consumers.

Health Benefits and Risks of Fish and Seafood As mentioned, seafood can have powerful benefits for the human body. Many varieties of fish have one or both of two primary types of long-chain omega-3 fatty acids: docosahexaenoic acid and eicosapentaenoic acid. These fatty acids are important in the diet because the human body can’t synthesize them on its own. Similar health benefits can also be found in a plant-based omega-3 fatty acid, a-linolenic acid, but eating fish is a primary way to boost consumption of those omega-3s.3

Freshwater and sea animals carry and consume methylmercury bacteria from both sources, and are then, in turn, consumed by fish and shellfish. Larger, preying species of fish often have larger amounts of mercury within them because they are more likely to eat other fish, versus a plant-based diet. In other words, larger fish often consume smaller fish with their own mercury concentrations. Over time, this diet can cause a buildup of mercury in a larger fish’s system.

What Sea Foods Are High in Mercury? 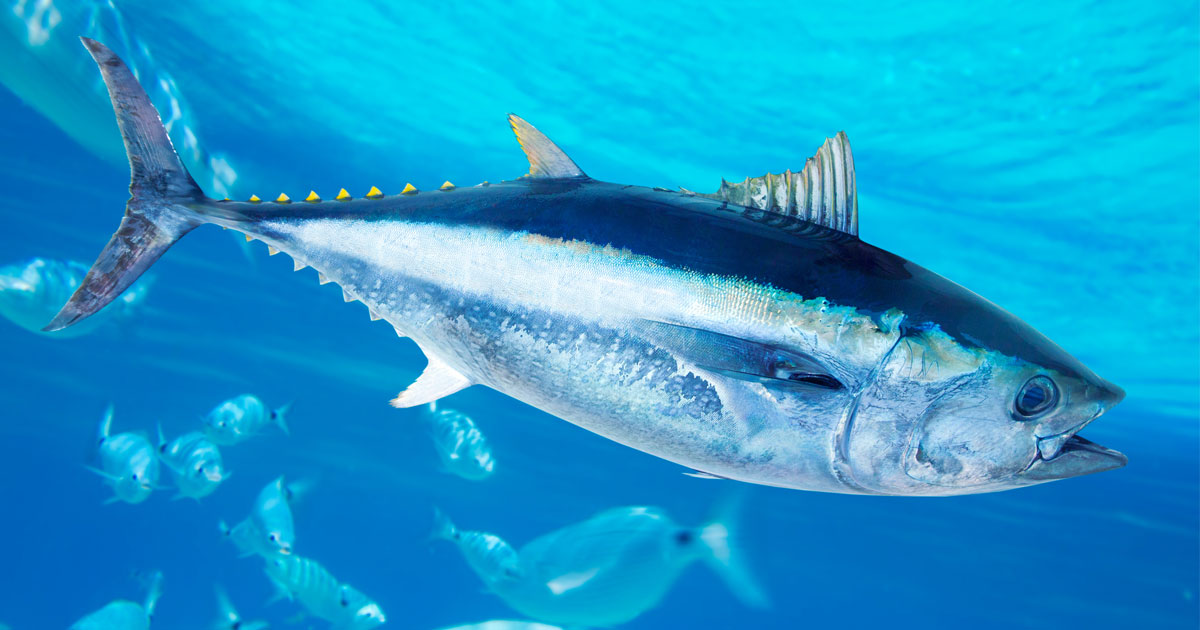 Levels of mercury can vary based on the age, size, and origin of the fish caught, as well as the season. 4

It’s important to understand why seafood is the main cause of mercury poisoning in the human body. The 2014 study mentioned above links seafood consumption to blood mercury concentrations in US adults. Researchers distributed a questionnaire about seafood consumption for the past thirty days to a sample of patients and retrieved mercury blood data for the same time period.

Elevated levels of blood mercury were connected to high-mercury fish consumption as well as high seafood consumption. The study posited that concerning sources of mercury exposure could include products like vaccines, which can contain thimerosal, or even dental amalgams. Other sources may include broken mercury thermometers, some jewelry, gold mining or extraction, exposure to industrialized air, or broken compact fluorescent light bulbs. However, researchers considered the mercury concentration resulting from these sources to be minimal. The primary accepted reason for mercury poisoning in US adults is attributed to seafood consumption.

The ideal amount of seafood to consume can vary depending on the mercury level, which itself varies by type of fish, age, origin, and more. It’s important to limit your consumption of mercury-heavy fish and moderate your consumption of lower-mercury fish to reduce your risk of mercury poisoning—especially if you are pregnant.

While there isn’t currently an established upper limit of acceptable mercury in the body, or an official level at which mercury levels are considered “mercury poisoning,” researchers have identified negative health effects in children and adults with over 40 nanograms per milliliter of blood. Obvious signs of mercury poisoning may occur near 100 ng/mL.

So, what are the odds of getting mercury poisoning from fish? Generally, poisoning occurs over time, with a gradual buildup of mercury. The half-life of mercury is fifty days, meaning that mercury levels will have naturally decreased by half within fifty days of your initial consumption. However, if you often consume large amounts of fish, you’ll be adding more mercury before the initial dose has been metabolized out of the body. Mercury is a neurotoxin, meaning it has adverse effects on the brain. Fetuses and young children are most at risk from improper neurodevelopment, but high doses of mercury also negatively impact adults.

High levels of mercury can cause neurological effects including:


If any of the symptoms appear suddenly and severely, you may have severe mercury poisoning, and should call a doctor. With elevated levels of mercury in your body, you’ll need to do chelation therapy, where a synthetic acid is injected to reverse the heavy metal poisoning from your body and bloodstream.

Mercury’s Effect on the Developing Fetus

Mercury is especially dangerous for those who are pregnant or plan to become pregnant. As the brain and nervous system of the developing fetus are formed during pregnancy, mercury can inhibit proper development. Mercury is incredibly damaging to fetuses because high concentrations of methylmercury can cross the placenta and fetal blood-brain barrier. As a result, the levels of mercury in the fetal brain are much higher than in the person carrying the fetus.

Predator fish with the highest known concentrations of mercury should be avoided at this time, including but not limited to shark, tilefish, swordfish, and king mackerel. The 2010 Dietary Guidelines for Americans recommends limiting consumption of these and certain other fish for those who are pregnant or breastfeeding.

Of course, fish can be part of a healthy diet during pregnancies, thanks to the omega-3 fatty acids, which can positively affect cognitive development. That’s why it’s important to choose fish with significant health benefits and low mercury concentrations, and consider plant alternatives as well. Fish with the lowest concentration of mercury and a good source of omega-3 fatty acids include:

To fully detoxify your body of environmental toxins like mercury, it’s crucial to remain aware of the concentrations of mercury in your favorite fish and the risks eating seafood presents. Though many studies have been performed to learn more about mercury levels, and their results have been published to inform the public of these risks and toxins, researchers often must combat the efforts of seafood company lobbies. These lobbyist misinformation campaigns are designed to create confusion and boost false confidence in the safety of seafood. For example, lobbyists will often claim that the health benefits of seafood far outweigh the dangers of toxins in your body. Again, it’s important for consumers to remain aware of the type of fish they’re eating and its origins, because mercury levels change can change drastically depending on the fish you enjoy and where it comes from.

Seafood lobbies push the same information to those who are pregnant, and claim that the health benefits of fish outweigh the risks of mercury consumption. However, the damage done by mercury poisoning to underdeveloped brains is significantly worse than the damage done to a neuro-developed adult. Worse, because of the fifty day half-life of mercury, the damaging effects of mercury can affect both adult and fetus for up to a year. This means that those who are planning to become pregnant should begin detoxifying their bodies far in advance.

Taking a general approach to eat fish in moderation will allow your body to detoxify safely between seafood meals. There are also other ways to get essential fatty acids, such as plants and supplements, without introducing toxins into your system. Seafood lobbies don’t want people to consider alternatives, or learn safe ways to consume low-mercury seafood; instead they want people to continue to consume seafood to reap the associated profits. That’s why it’s so important to understand the dangers of mercury poisoning yourself, and learn to detoxify your body to keep yourself healthy.

Keeping Your Body Free From Toxins

When you are more informed of the toxins present in your everyday life, you can more effectively avoid them and take steps to keep you and your body healthy. A best practice is to limit your seafood intake and avoid high-mercury species. If you’re concerned about mercury poisoning, find other sources of healthy proteins and fatty acids to replace seafood.

Removing dangerous toxins from your body is possible with Alternative to Meds Center. For more information about steps you can take to detoxify for a healthier life, contact us today.