This entry was posted in Addiction on August 7, 2021 by Lyle Murphy.

We are aware of other solutions at Alternative to Meds Center that are better than living your life dependent on bupropion, and struggling with the burden of bupropion addiction.

Bupropion is a powerful stimulant to the central nervous system and may have a high potential for dependence and abuse, leaving many users with a need for bupropion addiction help after long-term use. This drug works on the spinal cord and the brain directly by causing interference with normal neurotransmissions. Neurotransmitters are naturally produced chemical substances created in the nerve cells and used to communicate with each other. Neurotransmitters send and receive messages to regulate and influence our thinking and virtually all of the other systems of the body. Bupropion mainly affects a neurotransmitter called dopamine. Our drug treatment program addresses neurotransmitters that have been affected by prescription medications or other drugs.

How Does Bupropion Affect Dopamine, the Reward Chemical? Dopamine is a part of the natural reward system. For example, feeling good when doing a good job, feeling pleasure from family or other social interactions, feeling that our lives have purpose and feeling content, all rely on the transmission of dopamine. When a synthetic drug, such as bupropion, is accelerating the metabolism of dopamine, which uses it all up, there is a high risk for bupropion dependence. The drug is prescribed legally in the form of capsules and pills by psychiatrists and medical doctors or family physicians. However, when a person decides they want to come off of it and encounters bupropion withdrawal, or starts to notice that they feel like they need to take more of the medication to obtain the same effect, they may have become tolerant and physically dependent on it. At this point, many people need to go through some form of bupropion rehab to completely recover from their physical dependence on the drug.1

How Does Addiction to Bupropion Occur?

Many individuals feel safer if they are dependent on a medication that their doctor has given to them, making it much harder to realize, recognize and confront bupropion addiction behaviors. This can make it much easier to be in denial about their growing problem. All drugs that are addictive seem to have two commonalities: they initially produce a pleasurable effect, which is followed by an unpleasant rebound effect. Bupropion, through its stimulating effects, produces positive feelings but leaves the person feeling depressed later. This is likely because it suppresses normal dopamine production, and also affects another neurotransmitter called norepinephrine. This suppression of natural brain chemicals is thought to create a significant chemical imbalance.2 Physically, the user demands more of the medication to feel normal. This cycle of pleasure and tension often leads to losing control over the drug and physical addiction. Our bupropion cessation program can help effectively decrease withdrawal, as well as address the reasons why a person started taking this medication in the first place with bupropion addiction help.

Bupropion Addiction and Loss of Control of One’s Life 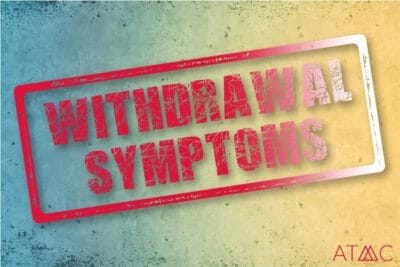 Antidepressant addiction can take over a person’s life. It short-circuits the person’s system of survival by producing artificial stimulation in the reward center, the pleasure areas of the brain. This can lead to increased confidence in the drug and decreased confidence in life’s normal rewards. This occurs physically at first, but then usually begins affecting the user psychologically as well. This results in a decreasing interest in other parts of life, but interest and reliance on bupropion increases. Bupropion withdrawal is also an important aspect of this addiction. The severity of the symptoms and length of the withdrawal can vary with how much damage has been done to the natural reward system from drug use. Some most common symptoms include extreme irritability, drug craving, energy loss, fearfulness, depression, paranoia, difficulty sleeping, shaking, sweating, nausea, hyperventilation, increased appetite, weight gain, and palpitations. Bupropion addiction treatment helps to greatly diminish uncomfortable symptoms of withdrawal and helps to regain control over one’s life.

People are usually first put on antidepressant drugs without there being any substantial amount of effort to try to find out why they are feeling depressed or why they are suffering other symptoms like fatigue or day-time sleepiness that could have led to bupropion addiction. For many people, seeking a prescription for bupropion can occur following an event that is emotionally traumatic for them, such as loss of a spouse, loss of a job, or following a period of poor nutrition, exposure to toxic chemicals, high stress, or other trauma or life circumstance that has left some negative impact upon someone. Years may pass and they still take the drug and will suffer from withdrawal if they try to quit. We focus on discovering what the real medical causes are for why a person is depressed.

Our bupropion addiction help program employs lab testing to start to identify these potential causes, and the use of natural substances can stabilize neurochemistry. It is also vitally important to remove the built-up neurotoxins that may have contributed to the person’s original symptoms. Alternative to Meds Center’s drug treatment program provides medical supervision to help people decrease their dependence upon psychiatric drugs, other drugs, or alcohol. To combat depression while the person is decreasing their medication dependency in a gentle and tolerable way, we provide many holistic therapies including targeted nutritional therapy, medication withdrawal techniques, massage therapy, yoga, peer support, mild exercise, personal training, and many other therapies to ease bupropion addiction treatment.