This entry was posted in Addiction, Mental Health on September 19, 2022 by Lyle Murphy.

Don’t suffer needlessly if you are a veteran with PTSD who abuses drugs or alcohol. Help is available. Traumatic events, stress relief, and societal norms are contributing factors to the prevalence of substance abuse problems among military veterans.

According to the U.S. Department of Veterans Affairs, more than 20% of veterans with post-traumatic stress disorder (PTSD) also have substance abuse disorder (SUD). And nearly one-third of veterans seeking treatment for SUD also have PTSD.

Not everyone who is involved in a highly stressful event develops PTSD. In addition to exposure to trauma, the Mayo Clinic suggests that the disorder is caused by a complex mix of those experiences with inherited mental health risks. Temperament and how your brain regulates your body’s chemical response to stress also contribute.

Treatment centers, behavioral therapy, and other drug abuse treatment options are available for veterans of the armed forces suffering from PTSD and substance use problems, and for their families. Inpatient and outpatient care at treatment facilities are available.

Resources for mental health treatment and support include:

Post-traumatic stress disorder (PTSD) is a mental illness disorder that occurs in people who have experienced trauma at some time.

Some things that may cause PTSD can include:

PTSD is similar to, but not the same as acute stress disorder, or ASD. Like PTSD survivors, those with ASD may relive the trauma and have nightmares or flashbacks. They may feel numb or detach themselves from reality. Symptoms occur between three days and a month after the event.

Some symptoms of PTSD, by contrast, may remain longer than 50 years.

According to estimates, ASD affects: 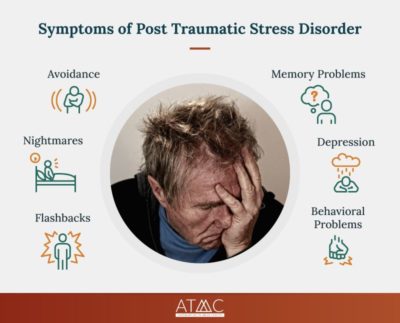 The symptoms of PTSD can vary over time when it comes to intensity. They can become more intense when the person is under general stress. Or, the person can be reminded of the traumatizing event by an everyday occurrence that seems similar. A car backfiring, for example, can be a trigger.

PTSD symptoms may increase with age, even occurring 50 years or more after the initial wartime event, for a number of reasons.

Retirement can increase symptoms by giving veterans more time to think about the past with fewer distractions. Plus, increased medical problems may make them feel less strong.

Some veterans who’ve used alcohol or other substances to cope in the past stop and become sober. If they are no longer able to become intoxicated because of health issues or for other reasons, they may find PTSD symptoms worsen.

They fall into three general categories:  reliving the trauma; avoiding situations that can trigger memories of the event; and a highly irritable, anxious state.

2. “What Is SUD?” The Doorway, New Hampshire Department of Health and Human Services [cited 2021 Jul 12]