This entry was posted in Antidepressant and tagged Long Term on June 1, 2022 by Diane Ridaeus.

Across the globe, doctors write prescriptions to patients without informing them what the long-term effects of Cymbalta are, or what will happen when discontinuing Cymbalta. The medication is given for a wide range of symptoms — from depression to pain from nerve damage.

Cymbalta has developed a reputation for being a medication that is very difficult to stop using. The symptoms experienced by long-term users of Cymbalta can make life unbearable at times. And when a person decides to quit Cymbalta, for some, the reactions can be pretty painful.

The long-term effects of Cymbalta include:

*DILI or Drug-Induced Liver Injury is discussed at length in Kang et al.’s 2011 study on the subject. The study reports on some patients who developed liver injuries which were reversed within 4 months after the medication was withdrawn.1

When someone is experiencing depression, Cymbalta can have some desirable effects that provide comfort during the crisis. However, after taking the medication for a while, many begin to experience a dependence or Cymbalta addiction. During this time, the unmanageable feelings of withdrawal could begin after being late on just a single dose or after missing a dose. Treatment for Cymbalta withdrawal should include a blend of physical, psychological, nutritional, and lifestyle interventions and the use of alternative treatments for symptoms.

While Cymbalta is widely known for its difficult withdrawal symptoms, it is typically not a drug of choice for an addict. It is not recommended for someone to take more than their prescribed dose, even in a crisis. Altering or adjusting even one dose could lead to side effects.

It is best to seek the care of a professional if you are unable to stick to a regular dose of Cymbalta, or look into non-pharmacological therapies as a Cymbalta alternative. People who are abusing Cymbalta, or obtaining the medication from an unstable source (other than a doctor), could find themselves in a situation where they must stop Cymbalta cold turkey. If this is the case, be sure to seek medical care if symptoms develop.

How to Discontinue Cymbalta Safely

Cymbalta (duloxetine) is a medication that is usually given to treat issues of depression. Regardless of the reason for being prescribed Cymbalta, it’s important that when an individual decides to discontinue any medication, they are also incorporating an alternative treatment to address any underlying issues. Dizziness, nausea, brain zaps, and fatigue are other commonly reported Cymbalta withdrawal effects. Cymbalta withdrawal may be experienced either when attempting to discontinue Cymbalta or, in some cases, in between doses — known as interdose withdrawal. Interdose-withdrawal most commonly occurs where drugs have a relatively short half-life, and withdrawal symptoms can emerge some hours after a dose is taken.2

So many people have been negatively affected by quitting Cymbalta that the term Cymbalta Discontinuation Syndrome is used commonly to classify the symptoms associated with withdrawal. If the symptoms become too much to handle at home, many attend healing centers for Cymbalta withdrawal.

Cymbalta is an SSRI (selective serotonin-norepinephrine reuptake inhibitor). For those who are reliant on Cymbalta long-term, the possibility of a serotonin deficiency exists. In order to effectively treat any long-term effects of Cymbalta, focusing on potential underlying causes is important. Reviewing potential underlying causes with a specialist can also help to ensure the treatment plan is accurate to address individual needs and characteristics.

An investigation to determine any underlying causes that may be contributing to an individual’s symptoms should include questions such as:

By reviewing factors such as these and others, with a professional, the individual is able to pinpoint and resolve or eliminate many obstacles to wellness.

Counseling or Therapy for Cymbalta Abuse 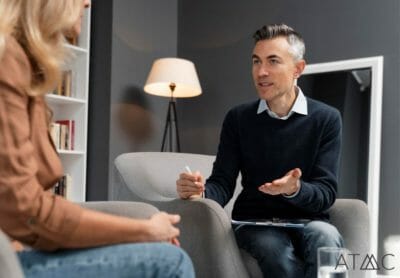 In addition to an integrative approach, which focuses on potential underlying issues, we always recommend seeing a counselor or therapist for support through the process of discontinuing Cymbalta. When an individual is dealing with Cymbalta withdrawal or side effects, fatigue and depression will often create a need for professional support to deal with the emotional trauma.

Certain forms of counseling have shown to be as effective (if not more effective) compared to the medication itself. As an example, CBT, or Cognitive Behavioral Therapy, is reported as being very successful for symptoms such as anxiety and PTSD. For an individual who is having lighter symptoms and just in need of some encouragement, a life coach or therapist could help provide support in the healing process.4

Whatever the situation, it is important that if someone wishes to discontinue Cymbalta, they need to find like-minded support.

The long-term effects of Cymbalta, as well as painful side effects, are enough to make many users want to come off the medication. There are many alternatives to Cymbalta, and if used under the supervision of a licensed professional, discontinuing Cymbalta safely is possible. However, Cymbalta withdrawal is known to be a difficult process, and while it does not affect every person who attempts to stop taking Cymbalta, many users will experience Cymbalta Discontinuation Syndrome.5

In more extreme cases, serious medical issues such as seizures or damage to the liver have been reported.

If you or a loved one is experiencing any of the above symptoms due to Cymbalta withdrawal or the long-term effects of Cymbalta use, an assessment can be performed to determine what level of treatment is needed in order to begin the healing process. Do not abruptly discontinue antidepressant medication. Always seek professional guidance and oversight for withdrawal from Cymbalta or any antidepressant medication.

Treatment for Long-Term Effects of Cymbalta and Cymbalta Discontinuation Syndrome

For many individuals, the symptoms caused by discontinuing Cymbalta could be so severe that medical attention is required in order for the person to move on. Severe symptoms like brain zaps, shaking, sweating, delusions, and burning or tingling sensations will often indicate there is a need for a high level of care. Many individuals who attempt to stop taking Cymbalta on their own, without professional guidance, will find themselves either back on the medication, on a new medication, or dealing with long-term side effects.

At select integrative healing centers, such as Alternative to Meds Center in Sedona, Arizona, licensed professionals will oversee the process of slowly tapering off Cymbalta, and will provide an assessment and treatment for the underlying issues. Entering an inpatient mental health facility to help come off the antidepressant is one way to ensure the process goes as smoothly as possible.

Alternative to Meds clients stay in a therapeutic atmosphere with daily relaxing and rejuvenating activities while being treated to all-organic meals and learning the tools needed to get healthy again. With the right care and attention from trained and licensed team members, individuals can heal from the long-term effects of Cymbalta.

For many who are dealing with Cymbalta Discontinuation Syndrome or antidepressant withdrawal, hope is hard to come by. Feeling like they will never heal, never feel better, or never sleep well again is a common theme. It is important for those suffering to understand that recovery is possible.

Each year, thousands of individuals are able to taper off their antidepressants safely and adopt a healthier, more holistic lifestyle. Stories of Cymbalta withdrawal success can help to offer hope, even during the most difficult of times.

Many individuals who have found themselves institutionalized or hospitalized as a result of Cymbalta withdrawal or Cymbalta side effects have been able to begin their recovery at Alternative to Meds Center. For more than 12 years, clients attending our Sedona, AZ wellness center have been able to find a safe place to heal and recover from the long-term effects of Cymbalta and other depression medication.