This entry was posted in Mental Health on July 18, 2020 by Lyle Murphy.

Alternative to Meds Center’s holistic mental health services and modalities are a primary focus for treating mental health concerns such as anxiety, mood disorders, and personality disorders. Holistic treatment of other disorders including eating disorders, narcolepsy, and Tourette’s Syndrome are skillfully managed in our licensed mental health facility with a compassionate, customized approach. 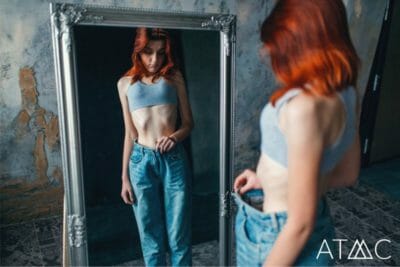 We work to understand the underlying mechanisms of these disorders, so we are better able to help our residents correct them.

Because the body relies on nutrients obtained primarily from food, eating disorders can play havoc with a person’s health in disastrous ways. Several common types of eating disorders in today’s population are bulimia ( binging and purging ) and anorexia ( failure to eat sufficiently ). It is alarming that in a relatively affluent western culture that these conditions ( enforced starvation ) are so prevalent. Like any type of starvation, both of these eating disorders can ultimately lead to extreme malnutrition and related other negative effects and symptoms.

Such things as kidney failure, cardiac arrest, and even death have been shown to be direct results of these eating disorders. Women in the Western world are statistically the populace where the highest prevalence of eating disorders can be found, thought to be closely tied to cultural pressures to be thin. The chemistry of the body becomes skewed where proper nutrition is not present, and the neurotransmitters in the body ( serotonin, dopamine, etc. ) may either cease to function at all, or overact, both of which conditions can then produce a myriad of physical and mental health symptoms and problems. Eating disorders often go hand in hand with other symptoms, such as depression and mood swings. Sadly, the most common treatments for eating disorders do not include a full assessment of nutritional deficiencies or other factors which could be assessed and treated and therefore could lead to a more complete resolution of the person’s health issues.

Eating disorders are commonly occurring and often debilitating. However, methods such as counseling and nutrition therapy can help overcome these conditions.

Though we are not specifically an eating disorder facility, Alternative to Meds Center has a broad understanding of the road back to health where eating disorders have disrupted a person’s wellness, and our goal is to help you achieve the wellness you strive for, and a healthy weight target that is optimum for the individual. Success often comes from impacting the complex neurochemical underpinnings associated with many eating disorders though holistic neurochemical repair and supplementation. Narcolepsy is a condition of sleep disruption leading to such symptoms as overwhelming sudden tiredness and other symptoms such as “sleep paralysis” also known as cataplexy.

Narcolepsy symptoms are physical in nature, and not considered a mental illness, however the condition does lead to other symptoms such as anxiety about social situations, hurting oneself from falling, and the like. It may be genetic in origins, and some evidence has suggested this. It may also be related to toxins from vaccines and other sources, as suggested by research done in Europe when instances of narcolepsy spiked and then returned to normal after vaccinations were done on a massive basis.

Narcolepsy can literally be exhausting, especially without the proper treatment.

Since these sleep disorders such as narcolepsy or cataplexy may have as part of symptom onset the reaction or response to environmental toxins, one of the most prudent treatments would likely be to effectively test for and remove toxic load from the body. As the condition does tend to gradually worsen throughout a person’s life, this would also support the possibility that toxic load is related, as it too would be gradually worsening through accumulation over the course of a lifetime. Narcolepsy can be a very debilitating barrier to a relaxed and comfortable life, as one who is afflicted generally develops a certain anxiety around social situations or work where a sudden onset of non-negotiable sleep might occur unpredictably. These symptoms can make this sleep disorder a very difficult condition to live with.

Our approach is to correct any potential underlying causes of narcolepsy while also effectively relieving symptoms through natural therapies.

If life has been ruined by this condition, perhaps it is time to consider a full body tune-up, such as Narcolepsy treatment involving full lab testing and purging any toxic load that has found its way into the system. Anyone can call the Alternative to Meds Center today for an evaluation and information on what treatment services may be of benefit in reducing symptoms and we hope that this may provide great and tangible relief as unwanted symptoms reduce and the quality of life is seen to improve. In the case of mania, the substance-induced high is usually followed by a crash. Hence many addicts have come to be diagnosed with bipolar1 as that pattern would seem to fit the criteria as laid out in the DSM. The usual mania treatment once diagnosed is to drug the patient with sedatives, antipsychotics, or other pharmaceutical drugs. However, if the actual addiction and risky behavior have not been curtailed in treatment, there is no drug in the world that will cure the highs and lows of drug addiction. Like pouring gasoline on a fire, it does not alleviate and can in fact exacerbate the factors that led to the manic state.

Mania can be made worse with the use of certain medications.

Substances Known to Cause Mania or Psychosis:

* In the DSM 5, substance-induced psychosis (i.e., psychosis while on antidepressants) attempts to narrowly define the condition as Bipolar 1, a mental illness requiring further drug treatment. However, there has been controversy on the subject of the diagnosis and best treatment of psychosis. Some medical literature observes the symptoms usually subside after the substance is cleared from the body.2,3

Although substance-induced mania may seem difficult to overcome, such symptoms related to mania can be addressed and corrected safely with non-harmful protocols.

Mania (from the Greek root which means “addiction to”) has come down the centuries to mean in current psychiatric verbiage, a condition lasting at least one week of heightened enthusiasm, euphoria, inability to sleep, and elevated self-esteem. Other characteristics have come to be added to the list, over time.

If one has suffered from substance abuse which resulted in a manic state that was interpreted as bipolar or another mental illness diagnosis, and the treatment received for it did not handle the situation satisfactorily, one can call us at Alternative to Meds Center.

One owes it to oneself to find out what other methods of treatment are available. Alternative to Meds Center knows that it is possible to recover one’s health and to also sustain the mental clarity and balance achieved through a sound treatment process, rather than the typical knee-jerk treatment of labeling and then drugging the patient.

Please call us at the center to find out more about how we treat substance-induced mania and other mental health issues using non-harmful protocols. The Center has a unique program which specializes in changing or optimizing brain and body chemistry naturally, based on nutritional change. This can be an effective way to reducing or eliminating the need for psychiatric medication.

There are some exciting new methods to treat various syndromes at Alternative to Meds Center. Did you know that brain and body chemistry testing is available at our center, so that the addictive biochemistry that may be contributing to Tourette’s syndrome symptoms can be addressed through change of nutrition and diet? Once the causes of non-optimum brain and body chemistry imbalance are isolated, these driving factors can be effectively addressed.

Once the causes of non-optimum brain and body chemistry imbalance are isolated, these driving factors can be effectively addressed

This is a very unique program which specializes in changing or optimizing brain and body chemistry naturally, based on nutritional change. In this way, addressing these factors can be an effective means of reducing or eliminating the need for psychiatric medication. We have had success with helping people suffering from Tourette’s syndrome symptoms using such a protocol. Clients have reported positive change and sometimes even full recovery from this challenging syndrome. Clients who have suffered for years have had their lives change completely for the better with customized Tourette’s syndrome treatment.

Individuals who have struggled for years have had their lives considerably enhanced with the help of our program. Call Alternative to Meds Center to speak to any of our knowledgeable and friendly staff, some of whom have themselves been freed of Tourette’s syndrome in the ways described above. We are here to answer your questions and can direct you to the best possible Tourette’s syndrome treatment.